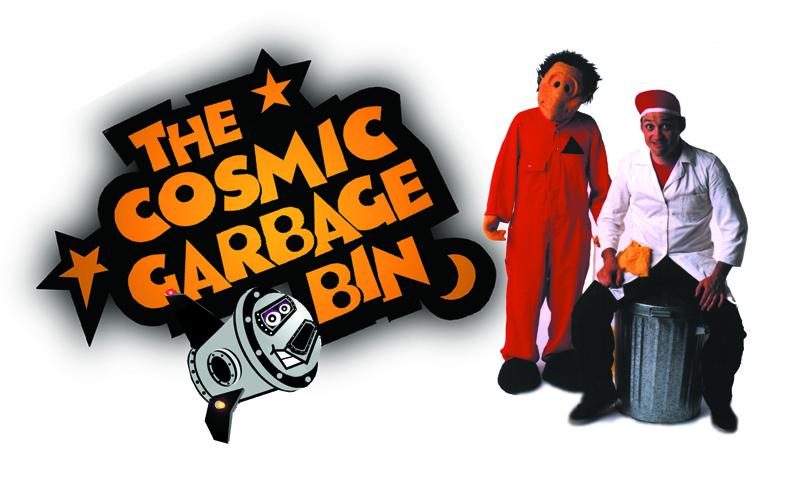 Fun for the Whole Famly!

The Cosmic Garbage Bin was created by David Cassel in 1984 and first presented in the theatre at The Calgary Centennial Planetarium as the first in a series of family shows scheduled at their venue. The project was a huge success and helped to establish a new audience for the planetarium. CGB continues to tour regional arts centres, schools and theatre festivals world wide.

The story centres around a grumpy theatre custodian, Gustav Croaker, who encounters an intergalactic garbage collector named Gorfo Ghirk. Initially Gus is so afraid and repelled by Gorfo, who is so strange and different than he, that he destroys Gorfo’s life support system plunging Gorfo towards almost certain death. Encouraged by the pleas of the children, Gus sees the error of his ways and, working frantically, restores Gorfo to good health. It is then that the two team up to hunt down Gorfo’s quarry, Voracious Ted the Garbage Monster, who has been seen destroying planets and lifeforms throughout the galaxy.  Technically the show is very elegant, has a minimum of props and can be set up in a 15 minutes if needed.  A one hour set up is preferred.

It is an hour of non stop excitement that is highlighted by beautifully crafted puppets, the appearance of a monster that eats grown men in one bite, and a full size, fully functional space ship!! The production’s timeless themes of cultural tolerance towards environmental awareness are the reasons why the production continues touring to this day.

Photos from the original 1984 production

After completing tours in Canada from 1984 through 1989, the show then moved to Australia where it toured from 1997 through 2000.  In 2005 the show was moved to Belgium and then on to Poland 2008.  Each time the show has been remounted, it has received enthusiastic support from arts councils, educational systems and select corporate sponsors who are dedicated to greener futures for our children .

In each country the show has been presented it has been accompanied by a study guide with exercises, quizzes and games that teachers are encouraged to work into the curriculum.

It’s subject matter of cultural tolerance and environmental responsibility is as relevant today as it was when it was created 30 years ago.  It  has consistently received 5 star reviews with the passage of time, continues to enthral the kids and is truly a show that stands the test of time.

The poster for the Polish tour in 2008